Tuesday to sunday, from 9am to 5pm

Tuesday to sunday, from 9am to 5pm 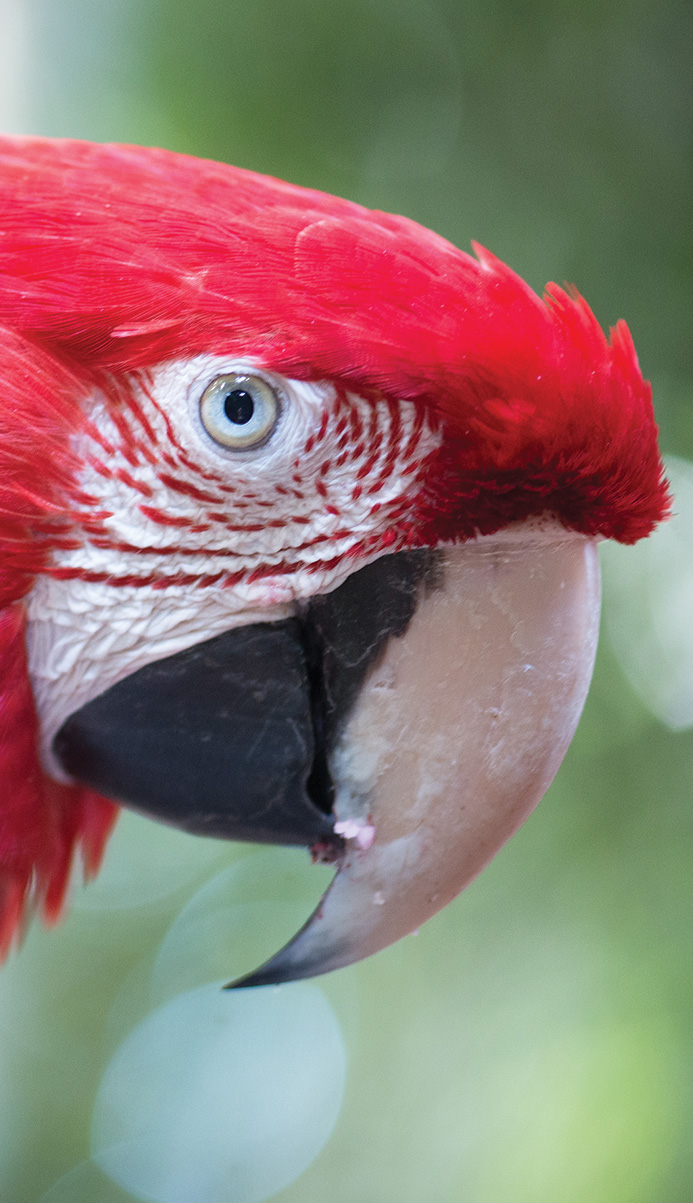 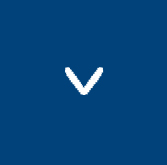 The Park works in different ways with different projects and initiatives.

We support actions, initiatives, or projects for the conservation of birds in most Brazilian states with Atlantic Rainforest. As our founder, Anna Croukamp, said, “But there is still so much more to be done!”.

Learn more about the criteria used to evaluate our possible contribution here.

We support various partners. See more about them below. 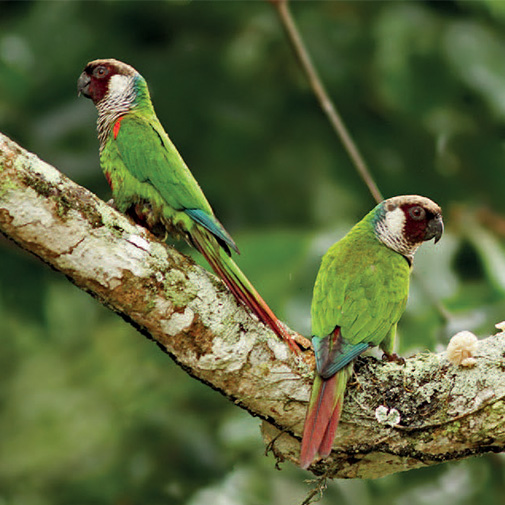 The Park works in different ways with different projects and initiatives.

We support actions, initiatives, or projects for the conservation of birds in most Brazilian states with Atlantic Rainforest. As our founder, Anna Croukamp, said, “But there is still so much more to be done!”.

Learn more about the criteria used to evaluate our possible contribution here.

We support various partners. See more about them below.

The grey-breasted parakeet (Pyrrhura griseipectus) is currently found in only four locations in the state of Ceará, but before it had a historical record of 16 locations in four different states. The main threats to the species are illegal hunting and the loss of nesting sites. For this reason the species has been classified as Critically Endangered (CR) by IUCN between the years of 2007 to 2016. However, thanks to the work of Aquasis, since 2017 the species has been ranked with a lower degree of threat: Endangered (EN). The Grey-breasted Parakeet Project started its activities in 2007 and in 2009 it installed its first artificial nests in the area of the species’ occurrence. After nine years of using these nest boxes, 841 chicks were observed leaving the nests, thus reversing the decline of the population. 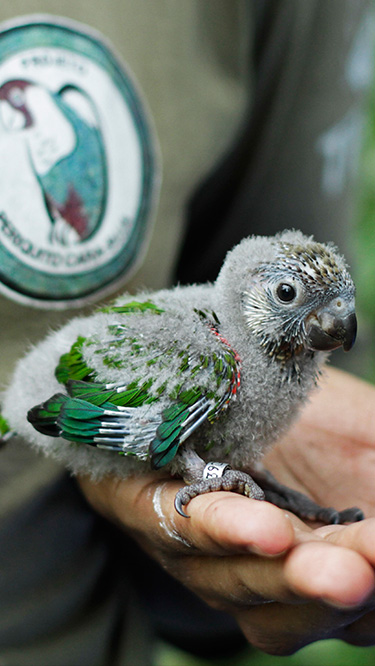 The research and awareness campaigns conducted by Aquasis also made it possible to create a protected area for the species in April 2018: the Wildlife Refuge of the Grey-Breasted Parakeet through an agreement between the Ceará State Department of Environment with Aquasis. The clear signs of an increase in the population of the grey-breasted parakeets in the Baturité highlands with new points of occurrence recorded show the scope of the increase, only made possible due to the continuous work of the team to increase awareness in their sparse areas of occurrence today.

Parque das Aves has kept individuals of this species under its care since 1999, obtaining reproductive success in the years 2005, 2006, 2007, 2008, and 2015 with the birth of 17 chicks of this species. The Park works with Aquasis and governmental bodies so that animals rescued from the trafficking of wild animals and cannot return to their natural environment can be sent to Parque das Aves. This measure is aimed at promoting a better quality of life to animals victims of trafficking, as well as contributing to the ex situ reproduction of the species. The future birth of grey-breasted parakeet chicks at Parque das Aves and the releasing of these chicks into nature is an important increase for the critical conservation actions already developed by Aquasis. 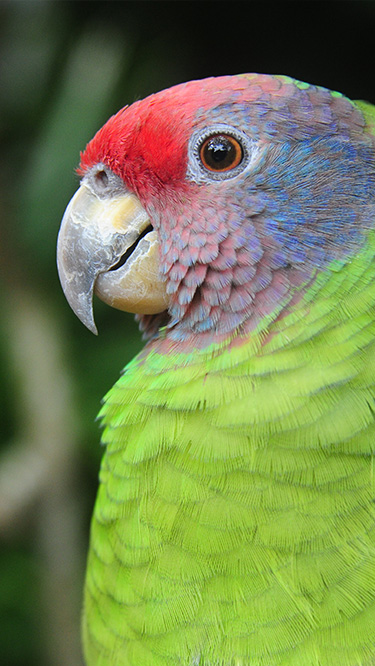 The red-tailed Amazon parrot (Amazona brasiliensis) is endemic to the Atlantic Rainforest of Brazil, occurring only along a narrow strip of a plain between the coast of Paraná and the south coast of São Paulo. The Paraná population of the species represents 80% of the total recorded in the country with about 7,000 parrots. Although the species currently is classified by IUCN as Near Threatened (NT), between the years of 1994 to 2000 it was classified as Endangered (EN), and from 2004 to 2016 as Vulnerable (VU). However, it is no longer found along its entire original distribution area, such as in the far northeast of Santa Catarina and other areas of southeastern Brazil. The main threats to the species are cutting down the trees in which the parrots nest, hunting, and the illegal trade of eggs and chicks.

Aware of this condition, in 1998 SPVS developed the Red-tailed Amazon Parrot Conservation Project in order to contribute to the conservation of this species in line with the National Action Plan for the Conservation of Parrots and their natural habitats—the largest continuous remnant of Atlantic Rainforest (the Atlantic Rainforest Large Reservation). In these 20 years of operations, the actions of the field team have resulted in the recent increase in the population of birds along the Paraná coast, and they consist in integrating the components of biological research, monitoring the population and reproduction, managing and educating for the conservation of nature, in addition to supporting the institutional integration between inspection bodies, non-governmental institutions, and education. In practice, these actions include the protection and monitoring of breeding sites, the monitoring of the reproductive activity of the parrots since the beginning of occupying the nest until the first flight of the chicks, carrying out a population census in the entire area of the species’ occurrence, and holding educational activities with the local community, especially with young people, in the states of São Paulo and Paraná in the areas of the species’ occurrence.

Parque das Aves has kept individuals of this species since 1994, obtaining reproductive success with 11 chicks between the years of 2007 and 2012. During the years of 2017 and 2018, Parque das Aves offered financial support for carrying out a census of the species. The censuses of the red-tailed Amazon parrot are the main indicator of the maintenance of the population in nature, as well as the success or the need for conservation efforts in the actions carried out by the project. The result of 2018 is that 9,112 birds were counted, which is the second most expressive in the history of the project. However, there is still much to be done so that the species finds an even smaller degree of threat. The effective protection for the preservation of the areas occupied by this species, for example, is extremely important since these environments are very fragile. 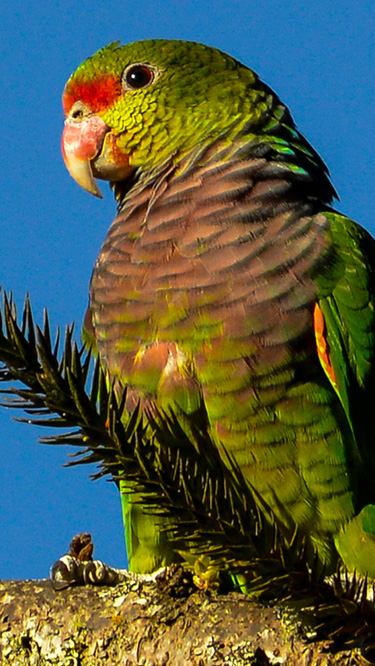 The vinaceous-breasted Amazon parrot (Amazona vinacea) can be found in Brazil, Paraguay, and northern Argentina. In Brazil they are found in the south of Bahia and northern Minas Gerais all the way to Rio Grande do Sul. Recent records for Argentina mention the midwest region of Misiones and an isolated population in Campo Viera. In Paraguay they have been seen at the Federation Units of Canideyú, Alto Paraná, and Caaguazú. Since 2009 they have been classified as Endangered (EN) of extinction by IUCN and have shown a trend of population decline according to the same source. In spite of the species presenting a wide geographic distribution, its population size in Brazil is still not completely known and is estimated at no more than 8,000 animals. The National Program for the Conservation of the Vinaceous-breasted Amazon Parrot, coordinated by the Red-spectacled Amazon Parrot Project, has been monitoring the species in the country since 2009 when 345 animals were recorded. In 2018 this record totaled 4,758 animals with 61% of them located in Santa Catarina, 22% in Paraná, and 7% in Minas Gerais. The sizes estimated for the other countries are quite concerning since they are not more than 500 individuals: 220 individuals in Paraguay and 203 in Argentina.

Just as with red-spectacled Amazon parrot, this species is preferentially associated with environments with an Araucaria forest, so the reduction in this type of habitat is one of the major threats to this species, along with the capturing of eggs and chicks and the absence of suitable nesting locations. Because of this, the actions of environmental education, alternative income generation for surrounding communities, and monitoring of areas of feeding, sleeping, and reproduction are considered as priority. 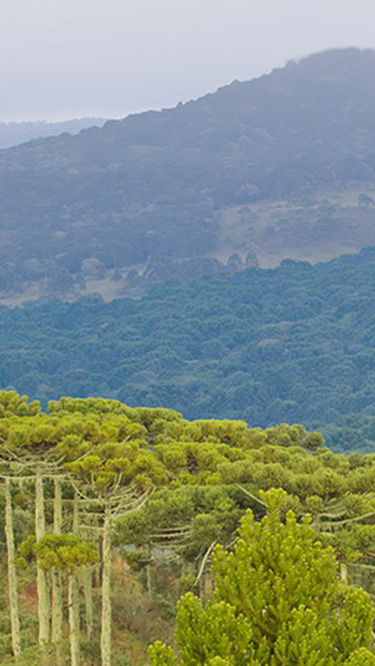 Another strategy for the conservation of the species is the Project for the Reintroduction of the Vinaceous-breasted Amazon Parrot into the Araucarias National Park established in 2010 by the Espaço Silvestre Institute. This action up until now has reintroduced 153 parrots at the site: 13 in 2001, 30 in 2012, 33 in 2015, 7 in 2016, 30 in 2017, and 40 in 2018. In 2017, Parque das Aves sent three animals from its population to be reintroduced into the site. When they arrived there, the animals underwent a behavioral training that prepared them better for the soft release process that they would pass through. Parque das Aves also contributed with financial support for building the nest boxes that offer this and other species a greater opportunity to find a place to nest in the region, and also provided the trap cameras, which are essential for the post-release monitoring.